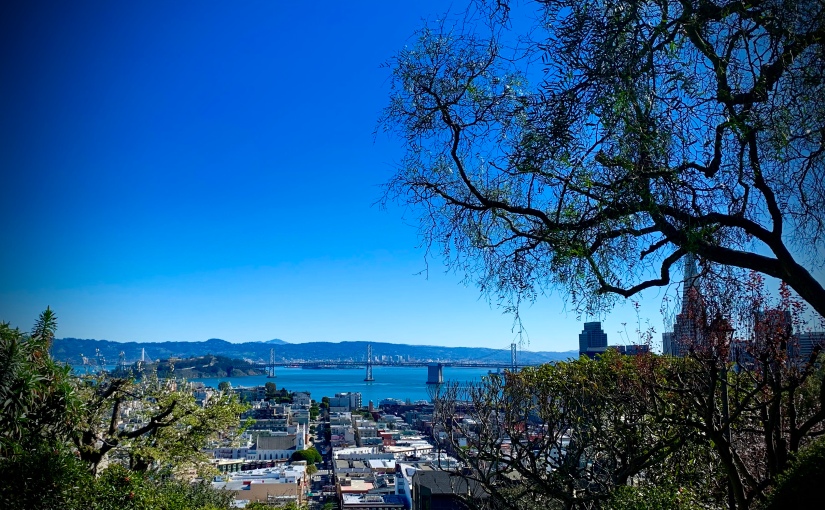 “Sheltering in place” …. These words will forever be tied to this moment in time.  Just like “out of an abundance of caution”, and “follow the science” – gentle ways of framing circumstances we would rather avoid, and we wish, somehow, we could erase. Roughly a year after those pandemic clouds gathered fully over San Francisco, skies are beginning, at last, to brighten a little bit here in what poet George Sterling first named the “cool, grey city of love”. During this year our lives have been restrained, by choice and by force, to varying degrees – so, when I saw that the good folks at City Guides San Francisco were resuming walking tours through neighborhoods and time, I signed up for a Sunday morning excursion – “The Russian Hill Steps”.  And, yes … there were a LOT of steps, as you will see!

Long before the Gold Rush that transformed our city, well before statehood, Russia was seriously moving to colonize western North America. Nearly 300 years ago Russian Emperor Peter the Great directed an effort to explore the area, rich in promise for the critical fur trade; it was Russian Orthodox missionaries who first worked to evangelize the Alaska Territory.  Russia established Fort Ross was established near Bodega Bay in 1812.   During those years, a cemetery for Russian Sailors was established in the area of this tour, hence the name Russian Hill. But the Spanish military presence in the Presidio and the related mission predated the Russian presence in what was then called Yerba Buena, and well outlasted it. Eventually giving in to political upheaval and other factors, Russia pulled back its hoped-for claims in Northern America; wouldn’t that have been an alternate reality!

My own history here is much shorter, of course – a relative newbie, I did not have the opportunity to visit San Francisco until well after my youth, even though I group up in Inland Southern California.  But …. I had seen the world-famous steep curves in another world landmark – the happiest place on Earth, Disneyland!   Back in the 50’s, and then updated as the years passed, Tomorrowland featured “America the Beautiful” in AMAZING “Circle vision” – I remember clearly standing in line for a VERY long time to be crowded into a “standing room only” viewing room with screens surrounding the viewers, shot by multiple cameras, including what was, for that time, a “virtual” drive through the streets of San Francisco, as you can see…..

But I would not actually “see” San Francisco until the 80’s, after my college years; my first trip to San Francisco as an adult was … well, truly adult.  And embarrassingly brief.  Yes, tender audience, I was a hick from the sticks in the big city – where “gay” was not an insult, but an invitation – as I drove through for just a few hours after completing college.  It was the early 80’s, before internet, so I only knew of the notorious offerings here through rumors, the “Advocate” at my college library, and a surreptitiously obtained mail-order visitor publication called the “Damron Guide”. Suffice it to say that visit was memorable and involved another kind of theater.  But as I have shared previously, my journey to self-acceptance was much longer than a drive up north, I could never have foreseen what time has unfolded in my life.

So the City Guide walking tours are an excellent way to explore all the nooks and crannies of my new home. I bravely set out, masked, that Sunday (the BEST day for free parking in much of the city!) and joined a handful of others on the tour; some residents, some visitors.  In fact, even our tour guide was relatively new to City Guides – he himself had only taken the tour shortly before COVID hit. Nevertheless, he was well versed in the names and dates and stories of the houses we passed, and their residents – the architects, poets, bohemians, the wealthy and the (in their time, at least) scandalous.  They had no idea their personal lives would endure and be shared for years thereafter.  Normally, I would take notes on the buildings and the history – I chose to forego that to take in the sights I share with you today, but you can find all that elsewhere, friends – In fact, here is one example.

In addition to the homes, vistas, and stories, there was one segment of the walk that I was eager to experience. Even though I was not an avid reader, I was well aware of a somewhat controversial in its time PBS program based on a series of books which started as a local newspaper column and become a world phenomenon – “Tales of the City”, by Armistead Maupin.  I actually never watched the program when it aired, but today’s walking tour included a stroll along this neighborhood’s Macondray Lane, which he designated as Barbary Lane in his semi fictional narratives.  Interestingly, several people on the tour had never heard of him, or the show – another piece of evidence that what is at one-point revolutionary in time becomes perhaps if not forgotten, less present in our culture.

If we think of our lives as a stroll through time, there are moments when paths cross that would never be able to guess, or plan – just, enjoy. One Saturday, about a month after our wedding, my new husband and I were planning to drive up north to a special book signing.  That morning, as I left the famous “Daddy’s Barbershop” in the Castro, I spotted a couple walking a dog near my parked car, and I tentatively approached.  The older gentleman smiled as I sheepishly inquired – “By chance, are you the author whose signing I will be driving to this evening?”  And, it was – Mr. Armistead Maupin and his husband Christopher Turner, who lived nearby, and who graciously took this picture with me.  That evening, after a long drive out of town for a signing of his autobiography “Logical Family”,  Bob and I got to take another photo with him; not long after, like others, they moved from San Francisco, this “cool grey city of love”.  But I am reminded of his words –

“The worst of times in San Francisco was still better than the best of times anywhere else”.

I cannot say how many hundred of stairs I walked on this tour; looking at the pictures of my stroll through these winding passages and eras, I began to consider – what do we remember of history? What do we preserve?  Who judges what is worth commemorating – or no longer deserving of respect?  This is in the news nearly every day now – whether it is about adding and removing memorials (by consensus, edict or force), eliminating publications, erasing music from performance – or lifting up heroes that, at one time, were considered far less worthy of recognition in their day.  As they say, history belongs to those who write it.  For me, the letters and diaries of my grandparents, parents and others are the only record that exists of their lives, and I feel a kind of burden to somehow carry their lives on rather than let them fade.  For many of us, photo albums in print form are a thing of the past – and when we are gone, most of our digital images will not be preserved, recognized, or remembered.

But our history today, however personal, and the lives and history of our family and loved ones, is worth preserving, and sharing. Perhaps it might help to think of it as creating a walking tour through the neighborhood of our lives, reflecting on lessons learned that we can share, love we can treasure, and hope we can gift to others that await us around the next bend. Especially in this very passage of change, we are living our own, unique “tales of the city”.  Wherever your home finds you today, as with San Francisco, it will not be entirely the same after someone decides that the vaccine programs have succeeded, and someone else decides we know longer to hear daily reports on statistics.  There will be the city before – and the city after.  Two cities, in a way – connected forever by this passage we still travel through, hesitatingly, unsure at times which way to take.  Although Dickens was speaking literally in a different sense when he wrote “A Tale of Two Cities” in 1859, his words about that moment in time resonate for me now –

As I write, after my husband, many family and some friends have received one or two shots of the COVID vaccine, mine lies ahead, time to be determined.  We are all in this moment awaiting, with somewhat held breath, for doors to open, friends to embrace, moments to be together after long parting.  Walking through Russian hill, once a cemetery for forgotten names, now steeped in history with more being created, and my own little memories – how remarkable it is to consider the winding road that brought me here, and lies ahead.  The phrases which I used to open this blog will someday be only in history books, but others will take their place; new challenges, new discoveries, new life.  Wherever your path leads you next, carry your dreams with you today, friends, and make the memories, and save them – every day, every moment, counts. I will hopefully see you around the next corner.

“It is times like these when we face such as enemy as AIDS, we need to draw on some of our past positive philosophies, like it is always darkest before the dawn.  In getting our courage together, we might feel a need to go back, and think of possibly better times.  And sometimes, it makes us wonder ….”