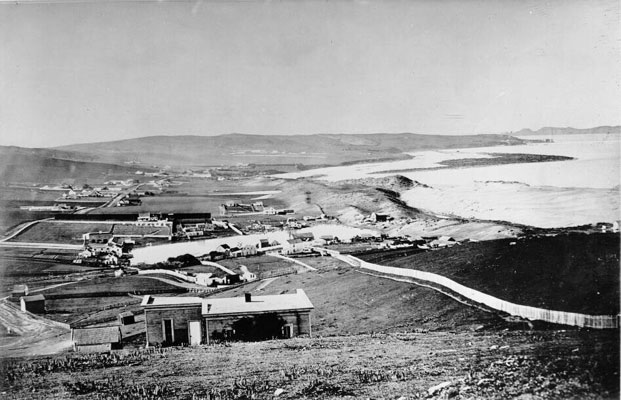 This past week brought my first opportunity in several months to discover new views of my recently adopted home town. The last six months have been crushing everyone in more ways than I can imagine – I am grateful to be with my husband, retired, and healthy. Nevertheless, the confinement has weighed on me, and I am sure on all you who read this, in different ways.  In an effort to direct some of my newly limited energy towards a constructive end, and other projects completed, I had recently committed to increasing my cardio activity, for both mental and physical health, by exploring the city. But where to begin? When I awoke in the wee hours last Saturday night, I recalled buying a book on Amazon prior to my move here in 2017, and I dug it out this past Sunday morning.

The book was “Historic Walks in San Francisco – 18 trails through the City’s past” by Rand Richards. Perhaps you have avoided this bad habit, but I have many wonderful books that remain unread for years, and this is one.  It inspired me, and I set out to explore an area I was completely whose background was little known to me – the oddly named Cow Hollow.  Most of the historic background here, and all but a handful of the destinations, I credit fully to Mr. Richards whose book is unfortunately out of print. However, although his guide is based on geography, I want to share my stroll based on timeline – beginning with the earliest spot on my walk. Come along (masked, please) as we stroll through a kaleidoscope of history and humanity.  (As it turned out, our stroll occurs on a day of record breaking heat!)

The Spanish expedition led by Juan Bautista de Anza from Tubac (then Mexico, now Arizona) to the San Francisco Bay of Alta California arrived at the site of the Presidio in June 1776. You can read more about their journey in this excellent website. Soon, they found a water source which fed into the bay, and it became their spot for washing – known in time as “Washerwoman’s lagoon”.  By 100 years or so later, it was filled in, and disappeared – now, the intersection of Grenwich and Gough represents what would have been its center.  The shoppers and residents here for the most part may not realize their homes were once in the middle of water!

It was not until 1847 that the first home was built in the area; long gone, it was built by Elijah Ward Pell, a member of a Mormon contingent who, according to the guidebook, was excommunicated for “licentious behavior” – shocking!  He chose to settle here, far from his former brethren who gravitated towards what was then called Yerba Buena. Today, the intersection of Green and Laguna bears no apparent marker of this first location of residence, but I am guessing he would have appreciated the liquor store’s presence in his time.

The little community grew to support the growing broader population. What we now call Cow Hollow originally took its name from dairies which began in the area in 1853, growing to about 3 dozen of varying sizes until roughly 50 years later when the last closed.  This lovely little home on Octavia is regarded as the last remaining “dairy home” in the area – the name remains, but thankfully, not the aroma.

From 1861, the Octagon house at the corner of Gough and Union is one of two remaining in SF, but in its era nearly 700 were built around the country – promoted as energy efficient and healthy due to greater light exposure.  But originally, it was on the opposite corner – nearly a century after it was built, PG&E acquired the property and offered it for a mere dollar to whomever would move it. In the 1950’s the National Society of Colonial Dames purchased it and moved it to the current site, where it houses their display of period historical mementos, with a lovely park next door.  On the day of my stroll, the park welcomed dog walkers, readers, and other socially distant friends to it’s sanctuary.

When Henry Casebolt built his stately home on Pierce in 1866, a mere 15 years had passed after moving to the city from Virginia with his wife and 11 children!! He was a blacksmith who had started his own carriage making company and developed several mechanical innovations for horse drawn transportation and, in time, cable cars. Imagine how lonely this majestic home looked 150 years ago, before it was surrounded by the residences of today.  The guidebook says that 20 years after it was built, Chinese laborers could be seen across the street in their vegetable garden on the still empty street.  Now, a posting on the fence describes a public hearing (virtual, of course) to be held regarding the homeowner’s wish to remove the palm trees, and the neighbors desire to retain them – they are incongruous, but San Francisco is not known for moving quickly on homeowners’ wishes for change.

This little alley, hidden behind a shall we say “budget motel” on Lombard, is Blackstone court – gated with a few homes which, like many, were moved here or repositioned over the years, but still date back over a century ago.  The gate bears a marker noting its significance going back two centuries along a trail past the lagoon to the military encampment at the Presidio – and, in time, the home of nurseryman Charles Abraham, who reportedly imported the first bougainvillea (native to South America) to California! Everyone loves bougainvillea! Imagine nearly the entire block surrounding this home with greenhouses, a windmill for power, and his own water tower – now, all gone and built over, save his original 1885 home.

There are endless stories of the 1906 earthquake and associated fires to the city as a whole.  I do not know if Cow Hollow was one of the most affected areas – but I found this wonderful account of a resident of the area, an “eyewitness to history”.

San Francisco has been a haven and perhaps a magnet welcoming many, shall we say, less mainstream faiths and beliefs, at least in traditional western society of that era.  Can you imagine being a Hindu in 1905, and the excitement you would have at the first temple in the Western US, perhaps all the US, opening – a place for you, your family, your friends to gather safely and look for hope and encouragement in a rapidly changing world.  Although the district is home to other beautiful churches and houses of faith, the architecture of this residence on Webster and Fillmore remains as both housing and a meeting place for its members. Like many buildings along the walk, it bears signs noting that classes and gatherings have been suspended due to Covid – but the windows above are open, and one day the doors will be as well.

SF is known worldwide for its role in the emergence of the “counterculture” – one might never guess that this little dining spot, for lobster rolls and burritos, once housed  “The Six Gallery”, and it was here in 1995 that the “beat movement” was birthed at a public reading of works, including Allen Ginsberg and his draft of “HOWL”.  The ideas, the passions and the energy that those minds and hearts generated reached across our continent in time – and the world.   Our city still gives haven to thinkers, creators and those whose lives challenge our ideas of traditional.

The six plus decades since the Beat Generation, the 60’s “Summer of love” and events within our own memory brought more changes. Many of those impacted my life directly and continue to change lives worldwide. I walked about 4 miles last weekend on my little time travel; I saw families, couples, a few dogs, some skaters – new life continuing in this memorial to our shared heritage. There are many more beautiful homes along the way, not all necessarily historic or architecturally remarkable, but perfect examples of the varied eras that have come and gone through the nearly 250 years since DeAnza brought the Spanish expedition north to this then very different land. Here I passed a steep street with the carefully maintained homes standing like sentries in time, watching over the lives, the people, the vehicles that change decade by decade, remaining vigilant yet.

As I strolled along Broadway towards Franklin, the view down one of the famous steep avenues of the city towards the bay brings “Dirty Harry” to mind, and so many other films created here over the decades.

Until a few years ago, I knew SF only from movies, and stories, and rare brief visits.  As I approach my car, I pass one of those sites that appear in tourist books, knowing that most of the stories I share with you today are less likely to be as well remembered as the fictional works of the silver screen.

As we reflect on our stroll, and I return to shelter in place once more, may I suggest this is not a time for wondering what we can regain from the recent past we have been denied for a brief moment, but rather what kind of future can we envision and work towards together.  Today, I gained new appreciation for the ongoing power of this city, and its peoples, to attract an unending variety of dreamers and schemers, hopes and visions, sharing our epiphanies and dejections.  That power exists everywhere, waiting to be embraced. Wherever you live, the history of your lives, and those who came before, can open hearts and minds to possibilities – we need them even more today.

Just think about the amazing variety of lives, dreams and cultures who lived within these few blocks over nearly 250 years. Catholics, Latter day Saints, Hindu faiths; radicals, entrepreneurs, immigrants; scoundrels, visionaries and like most of us, people just trying to get through it most days. From the few hundred who came from Mexico, to those who travelled by ship and wagon across oceans and continents for a chance for a better life, the “outsiders” who were viewed with suspicion by the more established cultures, and the emerging visionaries crying for change and meaning – this city, and our country, gave them – and gives us – a chance to grasp our dreams.

So thank you, Mr. Richards, for enlightening me on this delightful stroll – here is a link to a summary of his many books. I hope you will consider further explorations of your own, even if only remotely, through his work.  I don’t know when my next “real life” excursion may occur (hopefully soon) – but here is a preview of one that I took just a few days later, by chance on a day unlike any other in recent memory, which will be in my next post.   Stay safe, y’all, and keep on dreaming!

One thought on “Dirty clothes, Dairies and Howl – oh my”